Incorporate pauses, holds, and starting a new workflow into your workflows.

Written by Sam Gioia
Updated over a week ago

A workflow action is what you want the workflow to do. For example, this could be sending an email or creating a reminder.

You can even include actions that help you manage the workflow itself to affect how the workflow runs. This article goes in-depth on the various workflow management actions.

Click on a topic to jump to that section!

What it does: prevents the workflow from completing any actions until it is manually un-paused.

When a Pause Workflow action is triggered, the entire workflow will shut down. In order to get the workflow up and running again, you will need to go into the project, head to the workflows tab and click the yellow Paused button. Once the button turns green and reads Active, the workflow is running again. 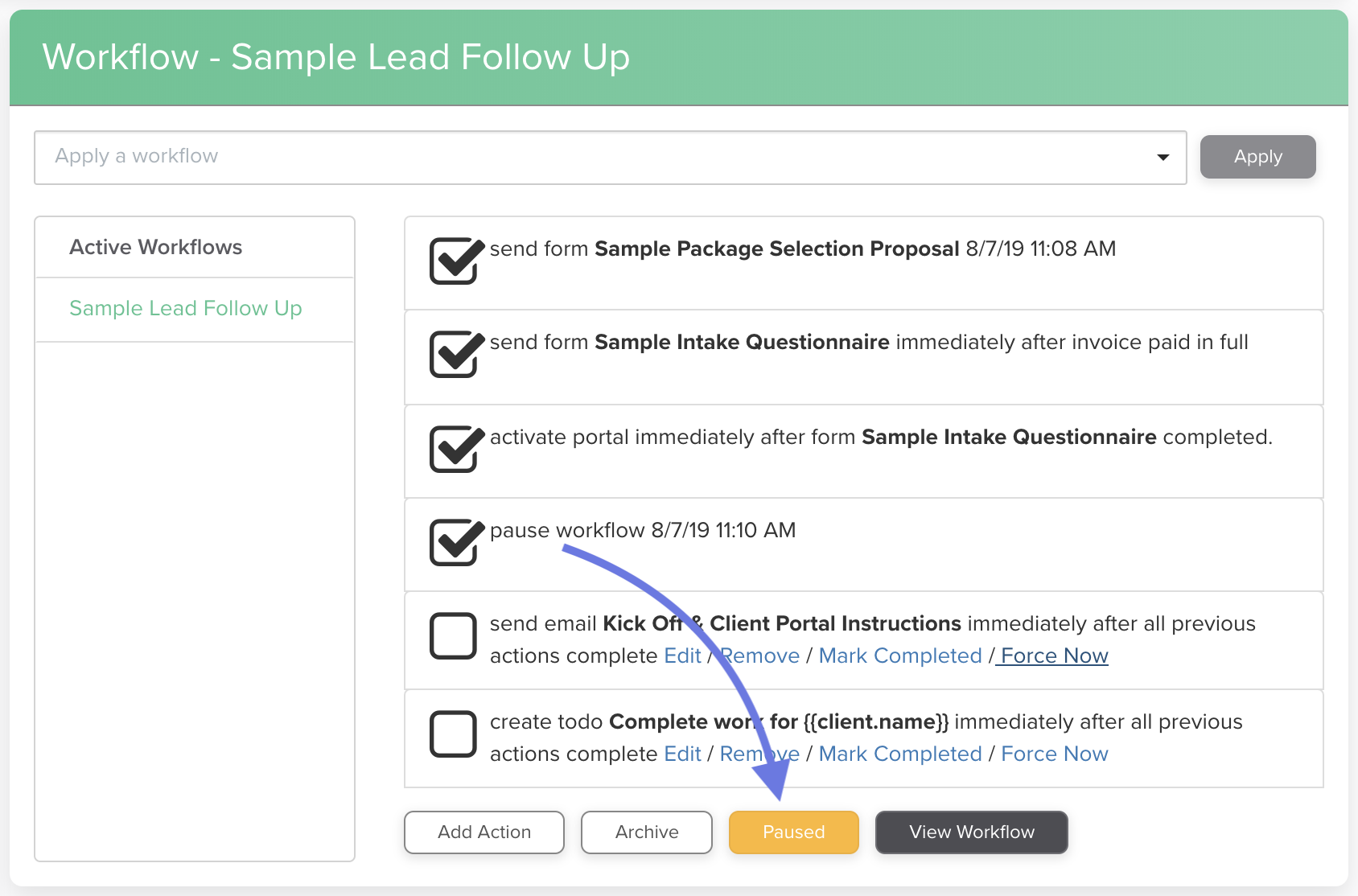 Common uses: Starting a workflow with a Pause action allows you to make changes to the actions when you need to heavily customize a workflow from project to project. Sometimes you may want a workflow to pause after a client completes a form or books an appointment if you want extra time to prepare for the next steps.

What it does: prevents future actions in the workflow that are triggered "after all previous actions complete" from running until a certain condition is met.

This can be a tricky action to wrap your head around, but it allows for some powerful customization of timing in your workflow!

Hold Actions Until allows you to tell certain actions to wait to run until a specific condition is met. Once the Hold Actions Until action is triggered, the actions affected by the hold will be "released" to run normally. You can use more than one hold action in a row to require multiple conditions.

For an action to be affected by a hold, it MUST be triggered "after all previous actions complete" AND be positioned below the hold action in the workflow.

Actions with any other trigger (project date, after form is completed, etc.) in the workflow will completely ignore the hold.

Common uses: Requiring multiple conditions to be met before running another action, for example, requiring the invoice to be paid, contract to be signed, and an intake questionnaire to be completed before sending an email.

In the example above, you'll see that we've stacked three hold actions to ensure all three conditions are met, before sending the welcome email. The Send Email action is triggered "after all previous actions complete" so it will be affected by the hold - it will not run until the invoice is paid, the contract is signed, and the form is completed.

Notice the project wrap-up email triggered "1 day before the project end date". This action will NOT be affected by the hold because it is not triggered "after all previous actions complete."

What it does: applies and activates a new workflow on the project.

How to set it up:

Common uses: The Start a Workflow action allows you to string multiple workflows together for longer processes with phases. Instead of creating one giant workflow with many actions, consider breaking up the process into logical phases. Shorter workflows are easier to comprehend and maintain.

Did this answer your question?