Written by Sam Gioia
Updated over a week ago

Each workflow action you create will also have a trigger. The trigger tells the action when to run based on the condition you set.

This article goes in-depth on two general-purpose workflow triggers: After Workflow Started and After All Previous Actions Complete.

Click on a topic to jump to that section!

When it runs: relative to when the workflow was applied to a project, either manually or from a lead capture form.

When to use it: on the first action(s) in your workflow, any time you want to count forward from when the workflow started

Example: Send an Email Immediately After a Lead Capture Is Submitted 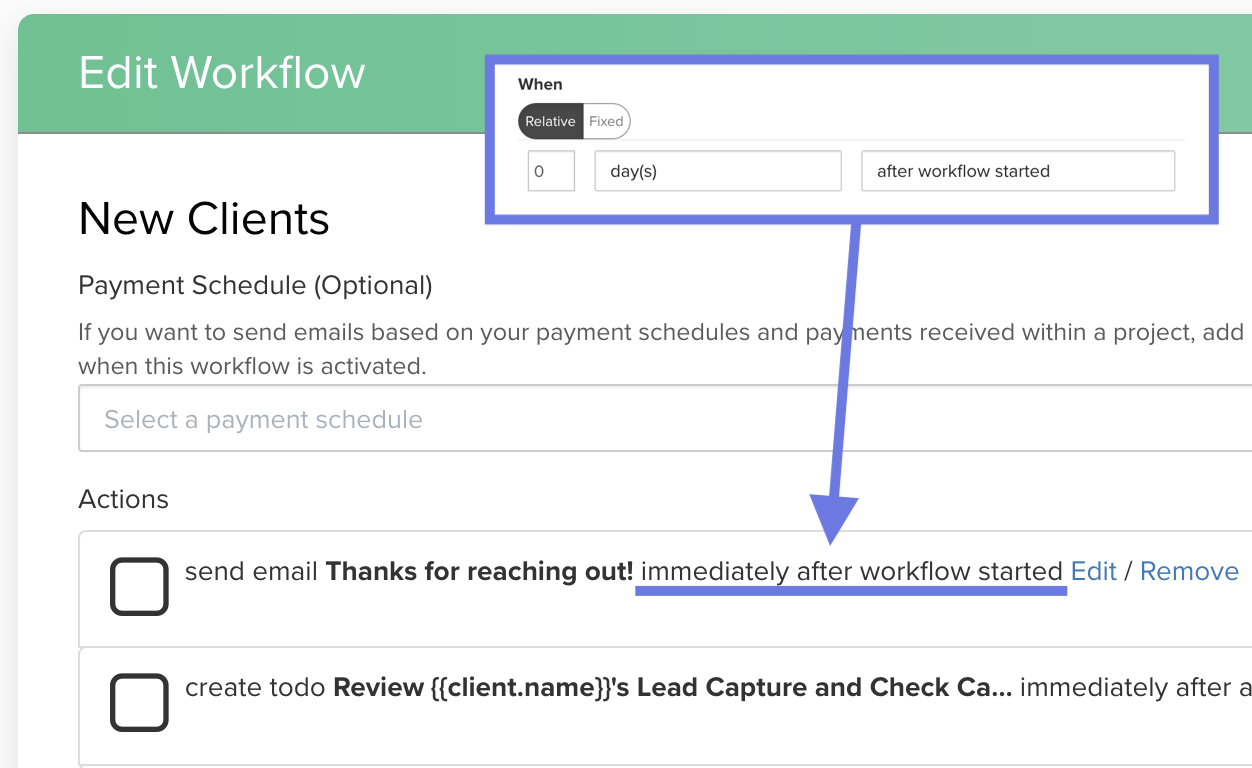 This example will work exactly the same no matter how you apply the workflow to the project.

After All Previous Actions Complete

When it runs: relative to when all of the preceding actions in the workflow, including any todos, are completed.

You can tell when an action has been completed by looking for the large, black check mark - Dubsado will automatically check each action off as it runs. A completed Create Todo action will have both the black check mark as well as a check in the smaller checkbox.

When to use it: on the first action in the workflow, any time you want actions to trigger one after another, when you want an action to wait for a todo to be checked off.

Example: Hold Off on Sending an Email Until You Customize It

Adding a Create Todo action to your workflow is a great way to give yourself time to make changes to the content, such as an email, that the workflow will be sending. In this example, we want to send a follow up email to a client after a consultation call, but we need to be able to customize the email with the details of our conversation.

In the workflow, we've already invited the client to schedule the appointment, so we can use the trigger "0 days after an appointment has ended" for our Create Todo action. The todo reminds us to customize the email. After the todo, we have a Send Email action triggered "0 days after all previous actions complete."

To learn more about controlling workflow automation with approval and todos, check out this article!

Common Issue: Too Many Actions Triggering Back to Back

It’s important to be as detailed as possible with the triggers that you choose. Using After All Previous Actions Complete can sometimes lead to actions running before you want them to. Take a look at the two workflows below:

In the first workflow above, all three actions are triggered "0 days after all previous actions complete." This would result in the client receiving three emails back to back! They would get their invitation to book a consultation, their proposal, and their intake questionnaire all at one time. Definitely not a clear client experience.

In the second workflow above, more specific triggers have been used to better space out the actions. The proposal will now be sent after the consultation appointment ends and the intake questionnaire will be sent after the client completes the proposal. You might want to customize the timing more, but this is a step in the right direction. The client is now receiving the correct information for where they are at in the process.

Did this answer your question?